The key to overcoming imposter syndrome is to find a community 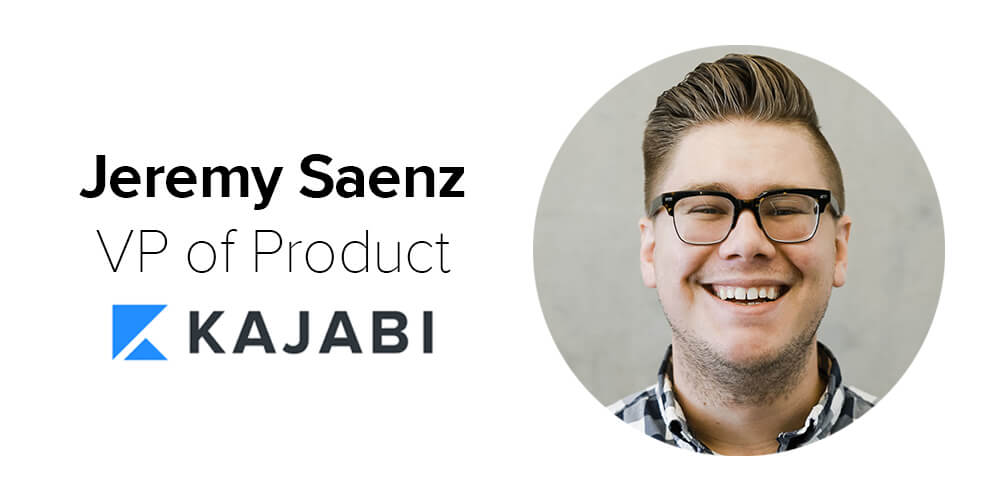 Jeremy Saenz, Kajabi’s Vice President of Product knows only too well how stressful the transition from a technical role like engineering to product management can be, and how that stress can manifest as a kind of impostor syndrome.

“For me what triggered those thoughts was the career shift,” says Saenz. “The career I was shifting from, I was really comfortable in. Not just the role, but the community. And now here I was, shifting into completely uncharted territory.”

Saenz had been an engineer at Kajabi for five years when his CEO’s wife was diagnosed with cancer. “[My CEO] had been doing most of the product work but had to step away and hand things off, and that’s when he said ‘hey I think you’d be a good VP of Product – here you go!”

For the first few months Saenz divided his time between product management and training a senior developer to replace him in his old role. The hardest part was figuring out what he needed to do each day. As an engineer, his daily expectations were clear. There were GitHub tickets to close, deadlines to hit. As a product manager he was wading into uncharted territory.

“There were a few times when I almost went to the CTO and told him to hire a real product manager to be my boss,” Saenz says.

At one point the company updated a feature that was central to their ecommerce platform. One of their biggest customers immediately experienced a sharp reduction in sales. Saenz’s team had to quickly roll back that change. “At the time we didn’t really have a discovery process in place it just felt terrifying.”

Kajabi was in a growth stage, which meant that getting the right product to market fast was critical. “At the time, stakes couldn’t have been higher,” Saenz says. “We couldn’t just throw things at the wall to see what worked. Losing our momentum would have been a disaster. So it was key to develop a discovery process for validating ideas before we began working on them.”

The solution was to find his tribe. “Engaging with product management communities on Slack – like the productboard Slack community and PMHQ – and being able to share tips, connect with others, and see what their processes were like… that was really enlightening. We also got some internal validation from within the company, and got to see how our work was making a real impact for customers.”

Eventually things began to click. Saenz took time off for the birth of his daughter and read deeply into the literature (including Marty Cagan’s book Inspired), and came up with a system for his team. Confronting the unknown also helped relieve stress.

“Setting up the product discovery process was completely new for our company. What really helped me get past the impostor syndrome was starting to see results from our new system.”

Saenz’s new approach treats feature prioritization as an ongoing process rather than a one-time decision. Promising ideas are moved into a discovery phase where the team works to de-risk them by answering the following four questions:

The process of answering these questions involves validating ideas with various stakeholders on a daily basis: the engineering team, marketing, legal, design, and of course, Kajabi’s customers.

Growing the team helped too. Having a sounding board of qualified experts. “On my team I’m the jack-of-all trades but we also have specialists now,” Saenz says, “I don’t have to fill in the gaps to design the best software; I can rely on my communication designer to write the best copy. I don’t have all this weight on my shoulders anymore.”

“If you don’t feel a little uncomfortable, you probably aren’t growing. Embrace the discomfort!” he says, and make sure to reach out to other product managers.

And for those less inclined to seek out community?

“You don’t have to become an extrovert overnight but do make those connections. Engage. Go online. Go on Slack. Get the word out about what you’re doing. Get those inputs and build what works best for your team.” 5 key design decisions to consider in your product process